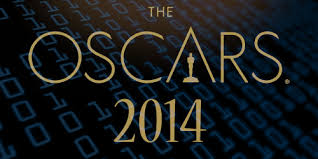 The 2014 Academy Awards have come and gone, with 24 statues passed out onstage in Los Angeles Sunday night (March 2). Now, some will say that those lucky folks who rode home in their limos clutching a little golden man at the end of the night won, but we all know the truth: trophies don’t winners make. In a night of dresses, dancing and Adele Dazim (?!), it’s what the audience thinks that really makes up a triumphant victory or devastating loss.

Not that it didn’t deserve to win, but I bet half the Academy members who voted for 12 YEARS A SLAVE never saw it.

The only other suspense of the night was whether Pharrell Williams was going to wear his hat, which tells you all you need to know about this Oscarcast.   Long, dull, and safe with some musical numbers tossed in to distinguish it from C-SPAN.

Welcome to my 18th annual bitchy-but-fair Academy Awards autopsy; helped out this year by the comedy writing team of Annie Levine & Jon Emerson.

There has been less Oscar buzz this year than any I can remember. Not surprising when a Reuters’ poll found that two-thirds of Americans have not seen ANY of the Best Picture nominees.  Of course that will all change now as throngs race to theaters to see 12 YEARS A SLAVE.

More on the show in a moment, but first – the traditional nod to the KTLA Red Carpet oozefest hosted by Sam Rubin and Jessica Holmes who now weighs less than her microphone.  Sam is the king of hyperbole.  At one point he said, “Now I’m joined by the biggest star of all, Al Roker.”   Oh well, at least he didn’t mistake him for Samuel L. Jackson.

Hey, I’m just glad he didn’t tell director, Steve McQueen that he loved him in THE GREAT ESCAPE.

Other favorite Sam moment – saying to Leonard Maltin: “Any surprises that you anticipate?”

Ellen was a big improvement over last year.  Of course, after Seth MacFarlane, Sacheen  Littlefeather could have done a better job hosting.

I thought her monologue was quite funny even if Liza Minnelli didn’t. Liza with a Z did not seem to enjoy being mistaken for a female impersonator.  She once beat the shit out of her husband for less.

Ellen’s bits with the audience were less successful. Don’t expect magic when you take selfies and pass out pizzas.   The Oscars are not the place to wing it.

Winner Jared Leto managed to acknowledge Ukrainians, AIDS victims, and his agents. As he walked to the stage I was hoping the announcer would say, “This is the fourth nomination and first Oscar win for Jesus Christ.”

Annie observed that Julia Roberts looked like she had left a napkin in the front of her dress.

Meanwhile, Pharrell Williams showed up in a tuxedo and shorts. Come on, dude. It’s the Oscars, not O.G. Mad Eye’s funeral.

Oscar drinking game: Take a swig every time someone says “journey” or “dream.” By the first J.C. Penney commercial you’ll be blitzed.

Highlight of the night was Darlene Love belting out her acceptance speech for 20 FEET FROM STARDOM. She got an impromptu standing ovation.

No standing O for Karen O however. As Jon said: “It was like open mic night at a coffee shop.” Especially when every other singer killed it.

John Travolta is now officially a moron.  He had only two things to do.  Dye his hair any color found in nature and pronounce Idina Menzel.  He could do neither. How do you get Adele Dazim from Idina Menzel? And this idiot has a pilot’s license?  Holy shit!

As expected, Idina Menzel lit up the room with “Let It Go.” Was there ever any doubt that would win Song of the Year? For one thing – people have heard of it.  Only downside:  expect it to be covered by every AMERICAN IDOL contestant for the next five years.

Chiwetel Ejjiofer, Barkhad Addi, and June Squibb lost, but I’m sure the Academy figures they’ll all be nominated many more times.

Since when does Bruce Jenner go by the name Goldie Hawn?

Between Anne Hathaway’s short hair and metallic breastplate, it’s like she came as Ivanhoe.

Lupita Nyong’o’s acceptance speech was lovely and heartfelt.  But too long.  And she didn’t sing it.  Did anyone else notice her play off music was from “Willy Wonka and the Chocolate Factory?”

The three inevitabilities of life:  death, taxes, and Jim Carrey won’t be funny.

I think Matthew McConaughey won as much for TRUE DETECTIVES as DALLAS BUYERS CLUB. My partner, David Isaacs, said it best: He put on a shirt and became an actor.

What was with those pointless “hero” montages?  “Hero” in Hollywood is just a euphemism for “movie star.”

How to win the award for Best Editing — Cut your movie down to 90 minutes.  That’s why GRAVITY won, Marty.

BAD GRAMPA and THE LONE RANGER were pretty much shut out.  But so were AMERICAN HUSTLE and CAPTAIN PHILLIPS.

The set looked like the old Dunes Hotel in Las Vegas.

Pink did a nice job with “Somewhere Over the Rainbow.”  Who knew she could sing without a trapeze?  But that’s not the only song in WIZARD OF OZ.  They could have featured “If I Only Had a Brain” and had John Travolta sing it.

Ellen came out dressed as Glinda the Good Witch.  It was the first time anyone has ever seen her in a dress.

Where was Steven Spielberg to celebrate the achievements of his fellow artists?  Oh right.  He wasn’t nominated.  Not there.

Bizarre moment of the night was Liza Minnelli hugging winner Lupita Nyong’o.  Liza must’ve thought she was Diana Ross.   Or her manicurist.

Jon said this about Tyler Perry: This is the first thing he’s presented that wasn’t Tyler Perry.

When Glenn Close started her preamble to the In Memoriam segment, she seemed so uncomfortable I thought she was introducing the writing categories.

How can the Academy say it’s too late to include Sarah Jones in the main body of tributes because she died two weeks ago and there was no time, yet Harold Ramis died a few days ago and he was included? Instead, they slipped her name in while going to break thus giving it the same reverence they give to promos for THE CHEW.

Bette Midler sang “Wind Beneath My Wings” but why?  It was after the In Memoriam segment. This is supposed to be a solemn tribute not the 11:00 showstopper.

It still kills me that THE INVISIBLE WOMAN was nominated for Best Costume Design.

Harrison Ford is now too old to go on the Indiana Jones ride at Disneyland.

Could Charlize Theron possibly look any more bored if she was at the Aetna Insurance Actuary of the Year Awards?

Goldie Hawn introduced 12 YEARS A SLAVE with a smile so big you’d think she was announcing the Powerball Lottery winner.

Spike Jonz won for Best Original Screenplay. If they writer who is suing him for plagiarism wins, does he get an Oscar too?

Oscar nominee Julie Delphy said the Academy was ” 90 percent white men over 70 who need money because they haven’t done anything in a long time.” Shockingly, she lost. The only person in America who picked her in his Oscar pool was John Travolta.

Kim Novak will always be identified with VERTIGO. First the movie, and now it’s what you get when you see all the face work she’s had done.

I was thrilled that Cate Blanchett won.  But now that someone thanked Woody Allen again on an awards show, expect five more moral charges to surface.

The post Oscar parties had to be more fun. I can just imagine John Travolta approaching one of the producers of 12 YEARS A SLAVE  and saying: “So what is the movie about?”